Neither Here Nor There: An Interview with The Artists 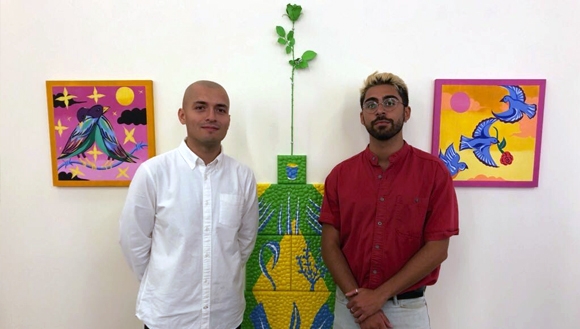 Artists Edward Salas (@pain_tingzzz) and Marco DaSilva (@quaintstruggle) spoke to us about their exhibition, Neither Here Nor There, which is now on view at MCC. In this eccentrically playful collection of work, Latinx-American artists Edward and Marco rethink the emblematic New York City Skyline as a symbol for identity culture, the urban environment, love, and spirituality. The textured hybrid paintings, made of non-traditional materials, reflect a dual identity and sense of belonging that is not rooted in one place, but often floating between many spaces. These works are a manifestation of their understanding of this lived experience.

Edward: My name’s Edward Salas, I’m a Queens NYC Native, Colombian-American, and I’m an artist and educator. I’m currently in grad school in Alfred University doing an MFA in Painting. I did my undergraduate at SUNY-New Paltz.

Marco: My name is Marco DaSilva, I’m a New York City native as well. I grew up in Chelsea. I’m Brazilian-American. I’m an educator and a painter, but also multimedia, I do a bunch of different things; theatrically staged photoshoots, sculpture, some textured paintings, video performance. And I went to SUNY-New Paltz as well, and that’s how we met and became friends.

On the Inspiration for Neither Here Nor There

Marco: We made this work for this show, it’s a completely new body of work.

I think we deal with similar themes and symbols and ideas in what we’re covering and in this diasporic experience. We talk a lot about hybridity and of being in between two cultures and two worlds and not feeling like rooted in one place but kind of floating between.

[When we came up for the title] we were just having a conversation at a friend’s barbeque and Edward said “It’s like ni aquí ni allá–neither here nor there.”, and then when we were talking about that as a title, we were asking ourselves if we should do it in Spanish or Portuguese, because I’m Brazilian and he’s Colombian, and then settled on Neither Here Nor There, which is the English translation.  I think that is very telling of the whole essence of [the exhibition].

Edward: Marco had been making a series called Empire State Casper, based on the silhouette of the Empire State Building, which I really took as a prompt to talk about some of the things that Marco just mentioned–these in-between spaces, and our identities as first-generation Latinx-Americans, as well as the more metaphorical and symbolic space of the New York City Skyline. I approached the horizon as a place of dreaming, or freedom, or a place of openness.

I think an element of this work is the idea of collage, and not just in the little sense of gluing paper to paper and making something, but collaging ideas and imagery. Living in New York City, I feel like a hybrid Latinx individual, a collage of many different things, and don’t just exist as one.

This work is about love, but they’re open enough symbols where you could talk about migration, you could talk about topical issues that are going on in America right now, and you can connect to it in many different ways, so we really wanted to start from the personal and then branch out.

Marco: We’re excited to have this show at a community center for people of all sorts of different backgrounds and folks from different countries, age groups, and generations. This accessibility is really important to us. I’m speaking for both of us, but I think we have similar ideas about some of the ways we make work that are accessible and inclusive. Edward has made tons of murals this summer, and there’s just something about art for anyone to digest, like it’s not just, you know, the white walls of a gallery. There’s something special about the fact that all types of folks are going to be coming through and will be able to see it. Not everyone is in an artistic environment or knows about art or has much experience or rubs elbows with people who do make art, so I think that’s kind of special—that it’s art for the people.

Edward: We both really wanted the work to function on multiple levels because we think about symbols a lot—so that a young child could see it and be psyched on the colors or the symbols or the shape, and that an adult or an elderly person could see it–anyone, really—and just take it in.

Please stop by our gallery during open hours (10am-6pm) to view Neither Here Nor There, now through October 4!

Manny Cantor • Manny Cantor Community Center News & Updates • Archive • Neither Here Nor There: An Interview with The Artists 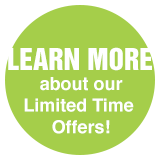 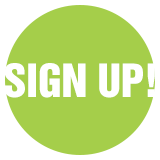 Manny Cantor • Manny Cantor Community Center News & Updates • Archive • Neither Here Nor There: An Interview with The Artists

Your ticket for the: Neither Here Nor There: An Interview with The Artists

Neither Here Nor There: An Interview with The Artists